The Roaring Lion Foundation (RLF) has published these pages:

The Story about Lord Invader and his Rum and Coca Cola: http://roaringlioncalypso.org/lord-kitchener-and-lord-pretender/ 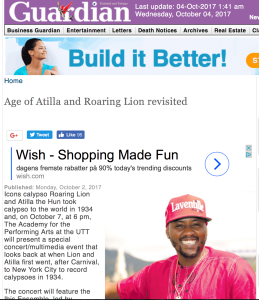 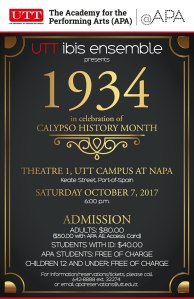 14th February 2017: Roaring Lion (Rafael de Leon) remains the sole singer to have scored four consecutive victories from 1935 to 1938 singing gems such as Netty Netty, and Dingolay Oy. He tasted success one final time in 1941 with Whoopsin, Whoopsin.

RLF would like to make a point of clarification. This article says that Lion won Road March on 4 consecutive occasions but in actual fact Lion won 5 Road Marches consecutively. The Calypsos that are mentioned above are correct but his first Road March was in 1934. It was called “Wanga” and it was a massive hit, popular with the Music bands and Dance halls of the time. Wanga was played on the road for several years after 1934. 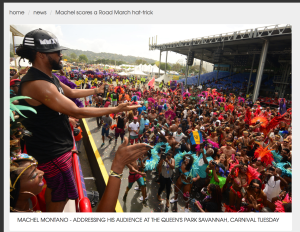 February 16 2016: Its back to the classics for UTT’s Ibis Ensemble!

The Ibis Ensemble of UTT will perform a free concert of early calypsos by Roaring Lion, Growling Tiger, Houdini and Atilla the Hun as well as early instrumental pieces by Lionel Belasco and Lovey’s Band. This concert titled Capturing Calypso, takes place tomorrow at the UTT Campus Theatre 1, at Napa from 7 pm. 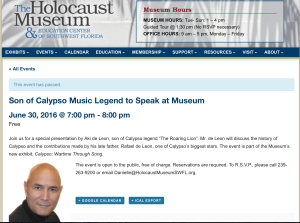 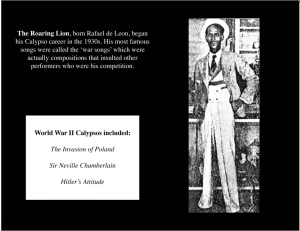 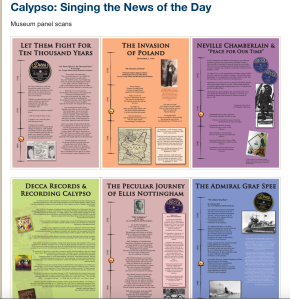 May 19th 2016: “Chinee Patrick” emerged in the first decade  of the twentieth century and in his heyday he did battle against songsters like “Fijonel”, “Executor” ,and “Chieftain Douglas”. In a 1956 interview with American folklorist Emory Cook,  Chinee Patrick recounted a 1920s lyrical “war”  against Lord Executor, then regarded as the preeminent extemporizer (“extempo artist) in the land and the true successor to “the greatest extempo calypsonian of all time”, the “Senior Inventor” (Henry Forbes). 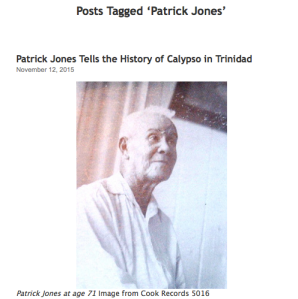 January 2016. Blue Boy pays tribute to the Roaring Lion and other Calypso Greats in his 2016 release called “We Calypso”.

This picture is the copyright of RLF.

10.10.15. Errol Peru from Heritage Radio 107.1 fm started running RLF’s World War 2 & “The significance of 1934 in Calypso history” from the 10.10. throughout the rest of the Calypso history month of October. He also had Fabien Alfonso from RLF and TUCO’s educational Officer in the studio live on the 17th of October. Picture below:

1.10.15. The month of October is Calypso History month in Trinidad & Tobago. RLF is using Face Book & the radio to contribute to this celebration. RLF has ran a segment several times a week for three weeks on WACK radio 90.1 fm. The theme is about “The significance of the year 1934 in Calypso history”. This segment will be loaded up to youtube before the end of October.

1.9.15. RLF aired a “World War II Calypso” series on WACK Radio 90.1 FM Trinidad. Different segments of the series were also aired three times a week for the entire month. The segments have since been uploaded onto RLF’s YouTube channel. 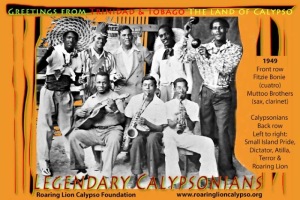 This post card was porduced by RLF. All copyrights belong to RLF.

Now RLF would like to remind the public that the “Roaring lion” researched and wrote a Calypso on the topic way back in 1934. It is called “Marry An Ugly Woman or A Logical Point Of View”. Here is the original recording. https://www.youtube.com/watch?v=sZnNwZyaGf8

20.08.15. RLF has published an article: The story about Lord Invader and his Rum & Coca Cola Calypso !!  http://roaringlioncalypso.org/lord-kitchener-and-lord-pretender/

Today the 9th of May and tomorrow 10th, RLF will be sending Mothers Day Greetings to Trinidad & Tobago via WACK Radio. The two selection are “Children Be Warned” by King Radio & “A Mother’s Love” by The Mighty Destroyer. These are two classic Calypsos and without a doubt, should be included in our school literature. Kindly listen and judge for yourself. https://www.youtube.com/watch?v=fR-EcOeXRHI

12.3.15. Mr Fabien Alfonso and Mr. de Leon from the Roaring Lion Calypso Foundation(RLF) were invited by Dr. H. Liverpool “The Mighty Chalkdust” to present a power point lecture for Master degree students  at UTT; the University Of Trinidad & Tobago at NAPA, about “Milestones In The Development Of Calypso” between 1900-1950. 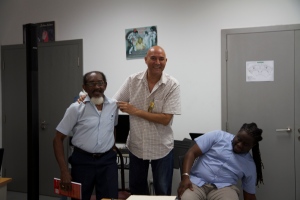 5.3.15. David Bereaux from WACK Radio 90,1 FM interviewed Mr. de Leon from the Roaring Lion Calypso Foundation in an hour long program about “Milestones In The Development Of Calypso” between 1900-1950. You can listen to the segment 29 minutes & 30 seconds into the link.  http://www.wackradio901fm.com/istream/index.php?player_mode=archives&station=1&archive_id=18336&archive_date=2015-03-05

3.3.15. Mr Fabien Alfonso and Mr. de Leon from the Roaring Lion Calypso Foundation(RLF) were invited by Professor Desmond Waith to present a power point lecture for Bachelor degree students at UTT; the University Of Trinidad & Tobago at NAPA, about “Milestones In The Development Of Calypso” between 1900-1950. 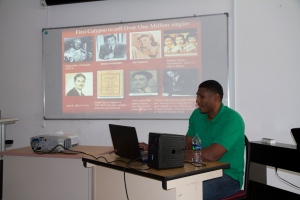 Kindly listen to that recording on this youtube link. https://www.youtube.com/watch?v=hvsV7iJ2YZs

Kindly listen to RLF’s Valentine Calypsos from the late 1930s. These Calypsos are also aired twice weekly on WACK radio between the 11.2.15 and Valenties day on the 14.2.15. Airplay time is ca. 12.10pm & 6.10 pm. Here is the youtube link https://www.youtube.com/watch?v=JGDw9OBppoM

On January 8, 2015, an article on “The Mighty Attila The Hun” was published

On December 25, 2014, an article on “Lord Executor -The Master Of Extempo” was published.

News!!! On September 23, 2014 – RLF aired a “World War II Calypso” series on WACK Radio 90.1 FM Trinidad. Different segments of the series were also aired on Tuesdays and Sundays for a period of four weeks. The segments have since been uploaded onto RLF’s YouTube channel.

Here is a link to the “Holocaust Museum” in Florida about World War II calypsos. Calypsonians singing the daily news!!  http://www.holocaustmuseumswfl.org/education/teachers/teachers-portal/high-school-ideas-curriculum/calypso-singing-news-day/

Roaring Lion Calypso Foundation (RLF) wants to research, collect and make available songs, song texts and history about the Golden Age of Calypso (1934 & 1950). This period is characterized by the arrival of a cadre of at bright Primary school educated men, the development of facilities like the “Calypso Tent”, professionalization of calypsonians, access to recording facilities and business sponsorship for local and international promotion of the art form.

RLF will endeavor to make our rich “Golden Age Calypso” history better known to the general population of Trinidad & Tobago.

RLF intends to use social media as a medium to exchange a multitude of perspectives on our calypso and carnival history.

RLF will use radio campaigns to highlight the “Golden Age of Calypso” nationally.  Roaring Lion left historical information about the era in both written and audio format, and this will be made available to the public in different ways.

RLF will seek to get “Golden Age Calypso History” into the syllabi of the primary and secondary schools.  RLF believes that many of the era’s calypsos have a literary, poetic, social and historical value for Trinidad and Tobago, and should be studied by the nation’s youth. Educational authorities can easily compare, assess and identify calypsos of worth, and impart this knowledge onto our youth.

RLF will continue working with projects that enhance and promote our culture and country.